June Mathis - Scenario Writer for The Trail to Yesterday

Gina Aroneo, Production Assistant at Psychotropic Films, has researched and written the following brief summary on the life and career of June Mathis - the scenario writer for the film being restored and documented in this blog.

Part of the process of bringing a silent-era film back to life is to better understand and document how the film originated and who the people were in the production that made this film possible.

Although we could not at this time find historical details of June Mathis's specific assignment regarding her scenario for The Trail to Yesterday; however, through Gina's research, we now better understand how she became involved with Metro Pictures specifically and the film industry in general.

In this post we bring you the contribution of June Mathis, who became of the industry's most influential contributors of the Silent Era. 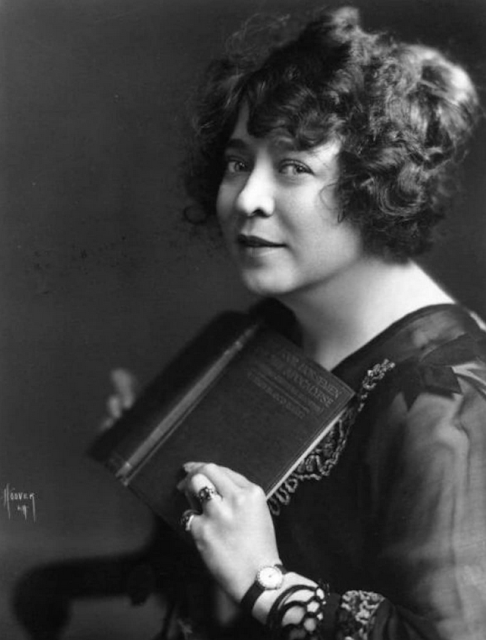 June Mathis “the dynamic, mystic, editorial director’’ known as “the million-dollar girl” by Photoplay Magazine was “the most influential screenwriter of her day”1.  Mathis was born in Leadville, Colorado in 1890 to theatrical parents and was on stage by age eleven.  Around the age of 13, she had good reviews performing in Vaudeville touring circuits and on Broadway.  After touring with the Julian Eltinge company in 1912-1913, Mathis turned to writing when performance dates on tour declined.  She settled in New York and after two years of self-study and submitted a script in a screen writing contest.  She did not win, but she did receive an offer by up-coming movie director Edwin Carewe, to write a scenario for the film, The House of Tears (1915) for Rolfe Productions and distributed by Metro Pictures Corporation. This was her first produced film. These associations led her to join the staff of Metro Pictures after winning the attention of Richard Rowland, Metro’s president.  June soon shaped the course of Metro’s releases and became the head of the scenario department at the 61st Street Studio2, which made her the first female executive in the industry3.

It was June Mathis who insisted that Metro make Blasco Ibanez’s WW1 novel, The Four Horsemen of the Apocalypse.   In 1919 Metro secured the screen rights, and Mathis started on the film immediately. She met with Ibanez, selected the director Rex Ingram, and chose a small-time actor at the time Rudolph Valentino.  The film was a major success making both Ingram and Mathis superstars.  The Four Horsemen was the highest grossing film in 1921.  Making nine million dollars during its original showing; it ranks sixth highest grossing film of the silent era.  Mathis and Valentino became good friends until a disagreement over the film The Hooded Falcon (1924).  They did reconcile before his death in 1926.  Mathis moved with Valentino to a new studio, Players-Lasky.  She wrote three films- Blood and Sand (1922), The Young Rajah (1922), and The Spanish Dancer (1923).  Blood and Sand stood as the fourth top grossing film in 1922.  It boosted the careers of Valentino and his co-star Nita Naldi, as while as Mathis4.

Mathis wrote a scenario for the troublesome Ben Hur (1925) production in association with Goldwyn.  However, the difficult production, change of directors and problematic script led studio management to change directors and to hire writer Carey Wilson to draft a new scenario replacing Mathis’s efforts5.

Mathis married Silvano Balboni, whom she met during the filming of Ben Hur’ on December 20, 19246.  After a year, Mathis left Goldwyn and moved over to First National as an executive and made comedies for Colleen Moore and Corinne Griffin.  Rumors had it that she was also writing for UA or MGM but neither came to be7.

Mathis’ remarkable career came to a sudden end in 1927 when at the age of forty she died.  This was totally unexpected.  She was watching a performance of The Squall on Broadway with her mother.  She stood up and cried, “Mother I am dying.”  She suffered a heart attack from a heart ailment she battled all her life.  She was buried next to Valentino in her personal crypt8.

June Mathis’ contributions to the silent film era are commendable.  By the time of her death, she ranked third most important woman in Hollywood. “She was a founding member of The Academy of Motion Pictures Arts and Science”9.  She worked on over a hundred films10, including the scenario for The Trail to Yesterday (1918) adapted from Charles Alden Seltzer’s book by the same name.  She incorporated spiritualism in her mystical scripts and enjoyed writing comedies.  June Mathis, however, was best known for her dramatic films11.

She is a legend of the silent film era.